Why Slingo Rainbow Riches is a Smash Hit Game 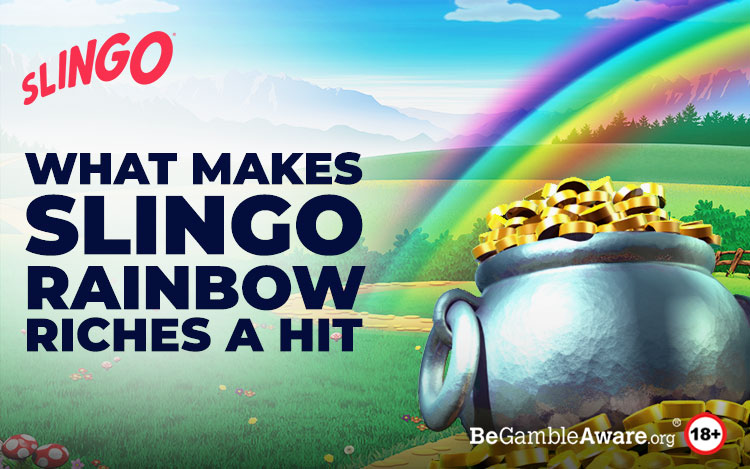 Slingo Rainbow Riches is one of the most popular Slingo Titles on our site; but why is this? Well, there are many reasons from its classic luck o’ the Irish theme, to its many bonus features, and of course its Slingo-style gameplay. In this article, we’ll be taking a deep dive into this Slingo smash hit, and discover why this title is so loved by our players.

Unlike other Slingo Games, the Slingo Rainbow Riches game features not one, not two, but three bonus features; the Cash Crop Bonus, Magic Toadstool Feature, and the Wishing Well bonus (which we’ll talk about later). With all this going for it, it’s not surprising that Slingo Rainbow Riches is a smash hit slot machine.

It’s worth noting that the theoretical Return to Player (RTP) of the Slingo Rainbow Riches slot game is a little lower than the market average (96%) at 95.6%, but considering all the bonus features on offer most players are happy to overlook this. The Slingo Rainbow Riches game is played at medium volatility which gives it mass-market appeal as all players can enjoy this game.

Spin All You Can

Slingo Rainbow Riches was one of the first Slingo games to offer its players an unlimited amount of extra spins which can be purchased once the original 10 spins have been played. The price for each extra spin will always be clearly displayed and will reflect your current state of play. This feature is another reason why the Slingo Rainbow Riches slot machine is so popular because it gives players the chance to potentially maximize their win potential.

All the Beloved Bonus Games

Of course, the standout feature of the Slingo Rainbow Riches game is its bonus features; something which Slingo games rarely have. Here’s a rundown of these exciting additional features which are triggered by players when a certain amount of Slingos have been achieved.

50 golden coins will appear on the screen and spin around. When they come to a halt players will win a multiplier prize. Players will then be given a coin toss; they can choose to decline and accept their current winnings or play on to the next round for the chance of a bigger and better multiplier value.

This is a pick-and-win bonus round where players will be presented with a screen full of toadstools. Players have to pick from the toadstools on the screen to reveal multipliers. However, if a player gets particularly lucky they may reveal a fairy and be awarded an additional bonus round.

This is a second pick and win bonus feature where players pick between wishing wells and reveal prizes. Choosing wisely will grant the player access to the Road of Riches bonus feature.

Road to Riches
This is a wheel of fortune-based bonus round where multipliers of up to 1000x your stake can be won!

Fall Head Over Heels for Slingo Rainbow Riches at SpinGenie

With such slot history, an adored theme, and winning Slingo formula, it’s no surprise that the Slingo Rainbow Riches game is one of the most popular titles on our site. Add in the many bonus games, and players are in for an incredible Slingo experience like no other. To try this game for yourself and many, many more, join SpinGenie today.

Get Competitive with these Great High RTP Sports Slots

The Most Immersive 3D Online Slots are Right Here at SpinGenie